3 Person Mechanics. Tips for getting great position as the Center position.

Goal: to help you be in the right position at the right time.

Transcript. Hello everybody. Greg Austin with abetterofficial.com. We craft video to help basketball officials get better and take control of their officiating career.

If you’re an opera singer and you have the high c that’s fantastic. If you’re a basketball official working 3-person not so much. That’s what we’ll cover today: center work in 3-person officiating. Today on five minutes on the officiating.

But now the ball has passed away whereas it passed to the centers primary. The center steps down so that when the ball is caught they have an open look on the play. If they were here and they stepped up they’d be in we’d have a two trail position with an uncompleted rotation we don’t need that. We need open looks. So, our center has an open look on the play. Lead moves to close down. What do we expect to have happen? A rotation!

The trail of course is officiating away once the ball goes into the center’s primary and is connected to the lead. Those two move in tandem. We’re back to our standard position. The 2 center position. Will be in this position a lot as a crew. When we are we’re in great shape. Open look on the ball and the defender. Center lead fantastic. So position adjust. Open look. Watching for the defender running at recognizing the rotation but holding position for a subsequent rebound. This is where i want to be. Controlled by the other team. I know i’m new lead. Off we go.

All right ball is swung to the weak side. The center could actually step down to receive this play. There’s no other action in this primary. This is a very common maneuver forcing a switch or trying to get on top of the play. Note where the action is on the court it’s on the far lane line. Screening action officials definitely engaged thinking about rotating. Is a rotation required here? Not necessarily. The center gives up his open look for a closed look in anticipation of becoming the trail.

New center has an open look on the play. What do we expect her to do? Nothing. Keep the open look. Steps down to have a better look on the resulting play. She knows there’s going to be a rotation. We have six players in her primary and more on the way. Step down. Get the open look. When the pass goes into the post continues up and i call this an artificial movement. A feeling that “i’m the trail i need to be up here,” when in fact, staying here would have given a better look on this play for footwork /travel. At possible traveling violation or subsequent passes to the wing here and here kicking out for a three pointer trail. New trail worsens her look by coming up to here.

I encourage officials to fight for the open look regardless of their role on the court. As trail see more lead balls in the center’s primary. Has an open look on the play. Has awareness of a competitive matchup also in his primary. This is not a competitive matchup. Gives up the open look now has a closed look. It’s a habit. It’s a habit officials have. I would say look at it when you’re breaking down film of your games identify whether you have a tendency to want to give up your open look. Just watch the center on this play it’s got a matchup in his primary. What does he do he steps down to improve his look. That’s his new match up. It stays there to officiate that play has a good look.

I would not drift any higher. Open up so you can also be aware of this matchup in your primary. Watch center again officiating the players in her primary. Officiating the players in her primary. Realizes a shot at a balls going to the wing here and a possible shot. Sees this defender sees this defender. Why? Because she has an open look on the play! Note the angle. She’s stepping down to improve her look. Has a fantastic look at the play. Gets the call right.

Thanks for watching 5 minutes on officiating. Join the conversation with comments in the comment section below. As always share this video with other officials who could benefit from it. Thank you. 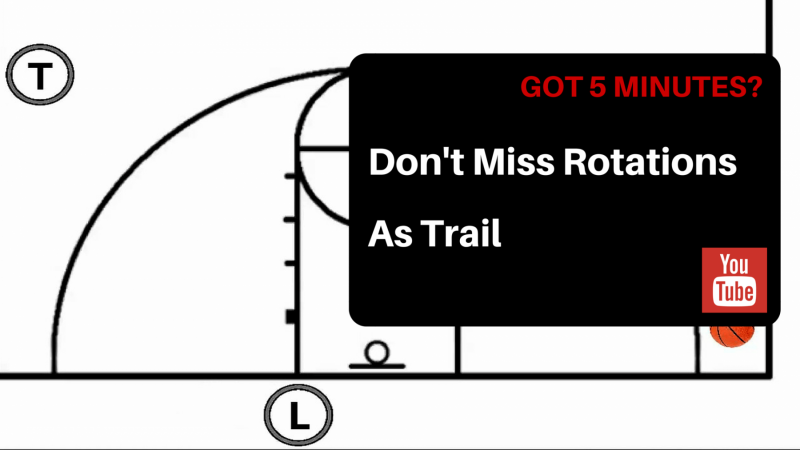 Cues as the Trail to help you be in the right position at the right time.

Hello everybody, greg austin with abetterofficial.com. Over the weekend, while doing some three-person training, a couple of officials asked me how they could avoid missing rotations as Trail. That’s what we’ll be covering today: Trail action in three-person mechanics. Today on Five Minutes on Officiating. Stick around. Many officials, especially those who also do 2-person mechanics, find themselves as Trail watching the ball in the Center’s primary and missing rotations as a result.

When this occurs the Lead initiates a rotation the Trail is connected to the Lead the Trail and the Lead are tied together they move together the Center maintains their position and keeps the open look. Look at our position as a crew we have the to Center position Trail Center in transition. The ball is in the Center’s primary. The Center picks up the action. Once this action is picked up Trail looks off ball here.

Picks up the rotation by the Lead here. Is in position as see to officiate this play. Ball gets swung when i have an open look on this play here all right Trail has on ball action is in good position the balls past to the centers primary. Trail looks away moves away when the ball goes into the Center’s primary. Make your first step as the trail a step down towards the end line. Look away officiate away!

Rotation is successfully picked up pass to the wing Center is in position for the catch. Sees the defender here here the Trail has dribbler and their primary defender the ball is passed into the Center’s primary. The Center has an open look on the play. Trail official looks away officiates away moves away. As if on a string tied to the Lead this is a great rotation. You Trail has on ball the balls passed into the Center’s primary. We’re expecting the Center to get an open look on this play.

We expect the Trail official is going to officiate away move away pick up action here and pick up a possible rotation by the Lead. We have great position as a crew Trail has on-ball defender. The ball is passed to the Center’s primary. We expect the Center to move and receive the play with an open look. We expect the Trail official to not see this ball caught in the Center’s primary but rather officiate away and move away which is exactly what we get. Picks up the rotation get to official play.

Thanks for watching five minutes on officiating join the conversation with comments in the comment section below as always share this video with other officials who could benefit from it. Thank you. 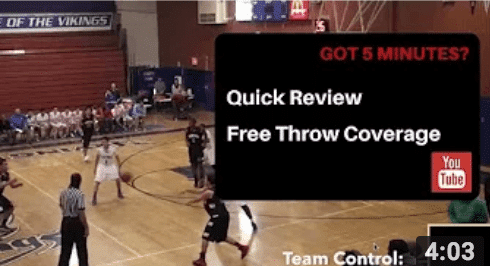 Free throw positioning Trail. NFHS rules in 2015-16 make it a violation for an opponent of a thrower to enter the semi circle, and make it a foul for
them to contact the thrower (if it is more than incidental contact) prior to the ball hitting the basket or the backboard.

Free throw positioning Trail. all right let’s look at a couple of examples first off positioning where to stand as the trail and 2-person mechanics
manual says halfway between the nearer lane line and the sidelines so we’d want
to be about here and we want to be just behind the free-throw line so possibly
right about here on the court would be a good spot we’re responsible for these
two players on the lane and the thrower in two person were responsible as well
for players violating beyond the arc so we want to position ourselves so that we
can certainly see these three players to detect if they violate or not and
usually that’s gonna be have to be up a step I personally like to stand right
about here right about here it’s a good place to start

this example our official is has a great angle on the play a little close to the
sideline notice the open look on the players here keeping the shoulders open stepping down
for rebounding action but not giving up on this responsibility here as well
bottom line we have more to do when we’re officiating the free throw we need
to make sure that our body position is such that we’re in the best position to
officiate the play when you break down the video of your game make sure to
check yourself how you’re doing positioning yourself to see what you
need to officiate don’t close yourself off make it a habit of staying open open
looks we love them if you found this useful give it a like share it too
officials who could benefit from it have a great day.