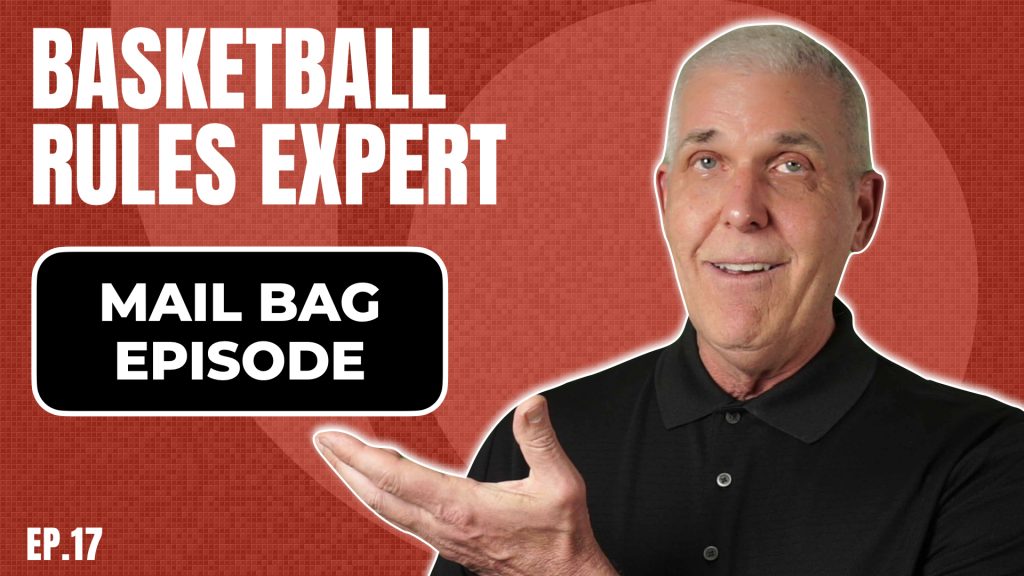 Link to the Online Quiz
Support the Show

Subscribe to the channel if you are interested in video content that will help you become A Better Official. Our content is geared to the basketball referee who wants to improve as an official and take control of their officiating career.

Our First Ever Mailbag Edition 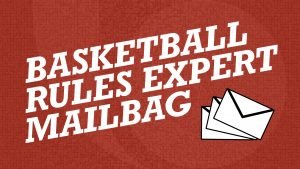 We’re back again for another episode of the Basketball Rules Expert. The show where we take National Federation of High School rules, lift them off the printed page, breathe life into them. simplify, clarify, amplify and then give them back to you in a format you could take with you on to the basketball court where it is most important. greetings again everybody my name is Greg Austin with abetterofficial.com where we help basketball officials get better and take control of their officiating career. I’m a basketball official here in the San Francisco Bay Area and I have been for over a decade. I consider myself to be a Basketball Rules Expert. This show is all about helping you on your journey to becoming a Basketball Rules Expert as well.

Shout out to our Awesome Show Supporters

Much appreciated and much love. If you want to support the show you can always buy us a coffee.

We’re going to get started with something different, a Mailbag Episode. we’re going to answer viewer questions from previous episodes and about basketball rules in general. You can submit a question for a future episode HERE.

let’s get started with our very first question 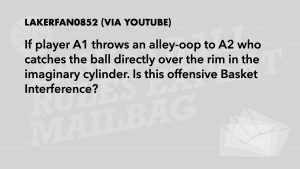 Bret Temple (via YouTube) if player A1 throws an alley-oop to A2 who catches the ball directly over the rim in the imaginary cylinder is this offensive basket interference?

Roger Meier: “in a previous video you made an error about what the timeout area boundaries are. maybe issue a correction.” 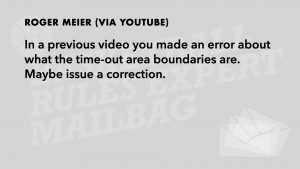 Danny Chapman (via YouTube) says, “my son was reffing and he had this last week A1 shot the ball B1 slaps the backboard to show off. the ball does not go in. He called the technical and the basket good. is that correct? 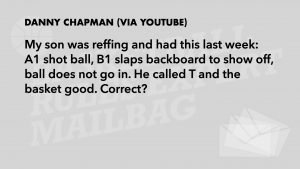 In the episode in which we covered this, we noted that it is a commonly misapplied rule. the slapping of the backboard, while it may be deemed a Player Technical by the official

cannot be ruled basket interference or goaltending. the slapping of the backboard has no effect on it for either of those rules. your son was very likely correct in assessing the Technical Foul but not correct in scoring the goal by rule 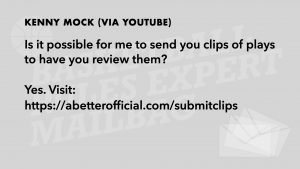 mae2759 via YouTube asks, “is the division line in the frontcourt or the backcourt or neither? 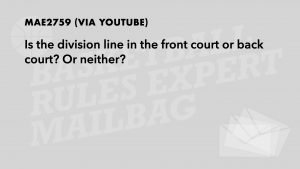 you know it’s a simple question but it’s a really good question. where could we find the answer? Our good friend, Rule 4!
Rule 4, section 13 defines court areas.
article 1
a team’s front court consists of that part of the court between its endline and the nearer edge of the division line including its basket and the inbounds part of the backboard.
that would be five of the six sides 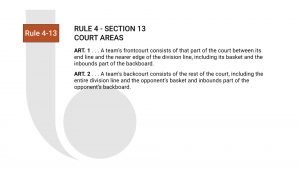 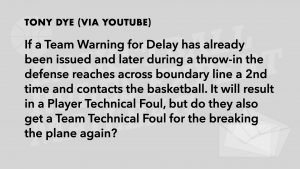 An excellent question! in our video on throw-ins where we covered this, we left it open. I said I didn’t know the answer to that.

it makes sense that that would also be deserving of a Technical Foul it doesn’t seem that there would be two technicals assessed. i left it open but to the rescue comes Dennis Hall (via YouTube) Dennis points out that there’s a case play that covers this very question
case play 10.4.1 situation D:
A1 is out of bounds for a throw-in. B1 reaches through the boundary plane and knocks the ball out of A1’s hands. earlier in the game Team B had received a team warning for delay.
that’s our play scenario that tony brings up! 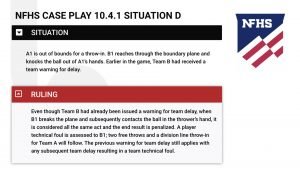 Ruling: Even though Team B has already issued a Warning for Team Delay, when B1 breaks the plane and subsequently contacts the ball in the thrower’s hand it is considered to be the same act and the end result is penalized. a Player Technical Foul is assessed to B1 for contacting the basketball. two free throws and a division line throw in for Team A will follow. the previous Warning for Team Delay still applies with any subsequent team delay resulting in a Team Technical Foul.
that clarifies the situation completely and we owe a huge thank you to Dennis Hall (via YouTube) for pointing out that fact. feedback is always welcomed on our videos. the whole idea is that we can all get better together 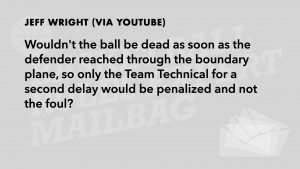 Nafur Re writes Must you give a warning before issuing a Technical Foul? 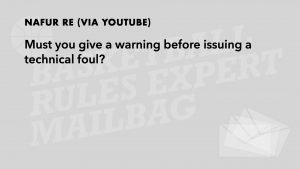 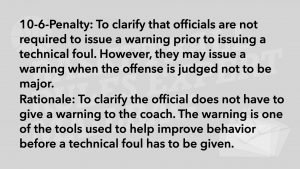 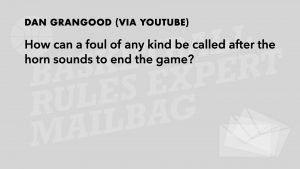 in general at the end of the game officials are making their way off the court now i know in some parts of the country there are requirements that officials potentially stay for handshakes or some post-game activity of some sort but in most instances across the country gay men’s officials are leaving okay that being said officials cannot disregard egregious behavior by a coach or a player it’s super easy to imagine a scenario right where the coach uh you know comes at the officials and pushes them we’re not going to assess a Technical Foul that’s a flagrant technical maybe the game has ended maybe it has no bearing on the game but we’re going to assess that Technical Foul. we have the power to assess that Technical Foul after the fact. if the Technical Foul could lead to a possible overtime or changing the result of the game we’re going to stop and come back and assess that Technical Foul. Then shoot the appropriate free throws and go through the proper procedures. it’s possible! it’s not too hard to imagine a scenario where a player, or a team member, or the head coach, or an assistant coach just does something absolutely egregious and can’t be ignored. thanks dan!

dave rush (via YouTube) in reality how many officials will T someone up after the horn where the offending team is up by 2? 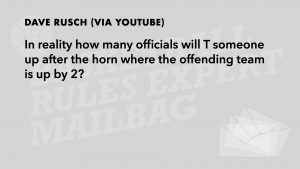 it’s happened, and it will happen again. I had an instance at the end of a game where we were on the verge of that exact same scenario. The head coach who won by two comes at the crew questioning, accusing etc. now what’s our motivation as officials? well why don’t we stick it around and hash this out and maybe we can get a Technical Foul go no our motivation is this game is over we’re leaving. but if the coach provides no opportunity for that by doing something egregious, then absolutely by rule a Technical Foul would be deserved. we would administer and see what happens in the game. absolutely. it’s gonna happen again. thanks dave!

thank you for joining us today for the Basketball Rules Expert Mailbag Edition if you find value in the content time to do all the things like subscribe hit notify and share the video content with others special thanks again today to our show supporters:

Much appreciated and much love. if you want to be a supporter of the Basketball Rules Expert show you can always buy us a coffee there’s a link above and in the show notes below or just head over to abetterofficial.com/coffee. we always have additional video content for you. We’ll see you in the very next video. 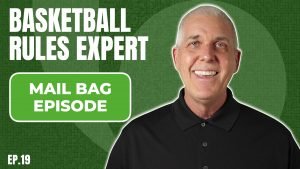 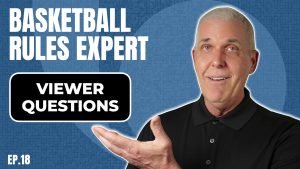 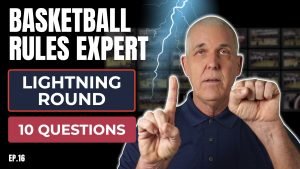 10 Ridiculously Hard Basketball Rules Questions that only an Expert Referee can answer!

Enjoy the Show? Consider Buying us a Cup!
☕️ Buy us a coffee!

Referee with FORCE! 12 tips to get your next Backcourt Violation call correct!